Chief DiRuzza began her law enforcement career as a Police Officer in January of 2004.  In September of 2005, then Officer DiRuzza, became the department’s first female DARE Officer. She attended DARE training in Nashua, New Hampshire and taught the DARE program at the Rye Neck Middle School, Mamaroneck Avenue School and the Westchester Day School from January 2006 until May 2011.

In 2007, DiRuzza was tasked with implementing the department’s Domestic Violence Unit. The DV Unit was created to provide victims of domestic violence with services and resources.

In January of 2015, DiRuzza was promoted to the rank of Sergeant. In her role as Sergeant, she was responsible for the training, directing, and supervising of personnel in their assigned duties.

In May of 2018, Sgt. DiRuzza was promoted to the rank of Lieutenant. In her role as Lieutenant, DiRuzza was responsible for the day-to-day operations of the Patrol Division (now the Community Services Division). She also worked with the Traffic Commission and participated in walking safety assessments to identify areas of concern involving both pedestrians and motorists.  Lieutenant DiRuzza was also responsible for the oversight and implementation of the yearly Governors Traffic Safety PTS grant for the department. This grant promotes increased enforcement of safety initiatives such as the “Click It or Ticket” and “No Empty Chair” campaigns. In December of 2020, Lt. DiRuzza was named provisional Police Chief of the Village of Mamaroneck Police Department. In March of 2021, she participated in and passed the Police Chief’s Exam.  She became the official Village of Mamaroneck Chief of Police in September of 2021.

“It is an honor and privilege to be able serve the Village of Mamaroneck in this new role. I am so proud of the men and women of this department. Since my provisional appointment, the department has continued to navigate through the COVID-19 pandemic, adhere to the governors mandate on Police Reform, strive to achieve NYS Accreditation, and provide emergency response through storms Henri and Ida. We have continued to provide a high level of service to the community and look forward to increased engagement opportunities with members of the public.” 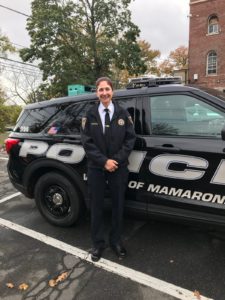